Faster, Better, Cheaper… What’s Most Important in a Pathogen Test?

For close to 20 years, Strategic Consulting (SCI) has been following the industrial microbiology market, and food safety testing applications in particular. As part of the data gathering for our most recent report, Industrial Microbiology Market Review, SCI interviewed 15 senior managers at major food companies and food contract labs (FCLs) to understand their priorities when choosing a pathogen diagnostic method. The interviews were roughly split between food companies and food contract labs.

SCI identified ten important attributes for evaluating a diagnostic method or instrument, and asked the interviewees to stack rank the top five items most important to them. 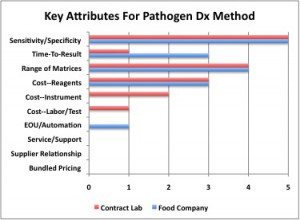 The three top-ranked choices were the same at both food companies and FCLs, with sensitivity/specificity the most important attribute. Second in importance was the ability of the method to be utilized in a broad range of food matrices. Ranking third was the cost-per-test for diagnostic reagents.

For food companies, time-to-results (TTR) was tied for third in the stack ranking, followed by ease-of-use (EOU)/automation in fifth place. Clearly food companies want quick results but only after they are assured that the pathogen diagnostic they are using provides accurate results and is able to work with a range of food types.

For food contract labs, the cost of the pathogen diagnostic instrument ranks fourth, and TTR is tied with the cost of labor per test for fifth. For FCLs, most of the key attributes in method selection are based on operational considerations, which makes perfect sense given testing is their business.

The explosion in the number of food safety pathogen diagnostic systems is confusing the customer and hindering change.

What a great IAFP (International Association for Food Protection) Annual Meeting last week in Indianapolis! It was bigger and better than ever.

A couple of things made a huge impression on me:

There were more than 25 pathogen diagnostic platforms on the exhibit floor.

While not an official accounting, someone who was counting as they walked the floor told me they quit at 30. This represents a dramatic increase from even five to ten years ago. Maybe all of these companies are reading SCI’s market reports extolling the size and growth of the pathogen testing market. 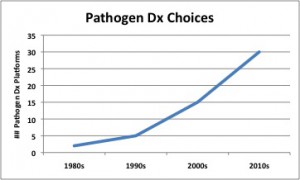 Too many choices and too much risk are hindering change.

On the IAFP exhibit floor, I had a conversation with a long time contact who is director of quality at a national food company. We talked about the proliferation of pathogen diagnostic choices and how it is inhibiting rather than fostering change. He sees no significant benefit in switching from his current platform, which not only works well but is well established in his plants. Changing to save $.50 or trim a few hours of production time is not worth it to him.

He was frank in admitting that he is afraid of the risks involved in change, and overwhelmed by the choices. In essence, he said: Who knows, in six months something newer and better might come along and I will have wasted time, effort and money in switching. Plus my boss will be upset with the money spent on the instrument.

Has the pathogen testing market become like the 24-flavor jam table?

There is a classic study on choice known as the jam study. In 2000, Sheena Iyengar and Mark Lepper published “When Choice is Demotivating: Can One Desire Too Much of a Good Thing?” which examined the consequences of having limited versus extensive choices. The research involved a field experiment in an upscale grocery store in which customers encountered either a table with a limited choice of six Wilkin & Sons jams or a table with an extensive choice of 24 jams from the same company. Everyone who approached the display table was invited to taste as many jams as they liked, and was given a $1 off coupon to purchase a Wilkin & Sons jam.

The key finding was that the 24-flavor table attracted more attention yet it resulted in fewer buyers: Just 3% of people who stopped at the 24-flavor table went on to buy jam, while 30% of shoppers who visited the 6-flavor table left the store with jam in hand. And while it seems logical that people who had more options would sample more flavors, that was not the case. People able to sample from 24 jams tasted an average of 1.50, while those who could chose from six sampled an average of 1.38 jams.

Has the pathogen testing market become like the 24-flavor jam table? Are there just too many choices without significant differentiation, and is that causing hesitation to change?