The third in our series of blog posts discussing the importance of food contract labs (FCLs) to the food safety testing market, this week we look at the evolution of the FCL market over the last 50 years.

Food contract labs were started by entrepreneurial scientists beginning in the late 1960s. The early FCL entrepreneurs often had areas of specialization, and set up independent laboratories to provide food company clients with services and analyses in those areas (mainly microbiology).

Over time, some of these labs grew into regional, and even national, networks of labs. Deibel and Silliker Labs are prime examples of FCLs that followed this path in the 1970s and ‘80s, and into the early ‘90s. 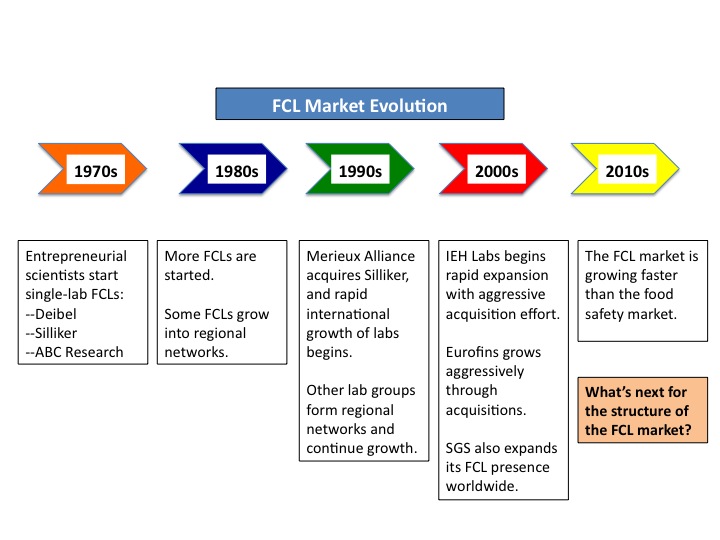 As 2000 approached, the FCL industry was undergoing major changes:

It is also worth mentioning that over the last ten years, more and more TIC (Testing, Inspection, Certification) companies are entering the FCL market. What was originally a business based on food safety expertise is evolving into one more tightly tied to the broader testing, inspection, and certification market. 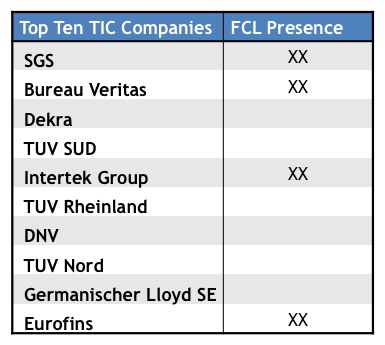 The global TIC industry is huge, with revenues of more than $120 billion in 2010. TIC companies started over 300 years ago to provide common measurements for shipping and other commercial activities. Today the TIC industry is growing worldwide, but particularly in the emerging economies of Asia and South America, spurred by a combination of regulatory and economic factors. One key driver is increased global trade and a resulting consumer demand for improved food quality and safety. As a result, leading food manufacturers are requiring third party inspections and certifications of products and services.

Like the food contract lab market, the TIC market also is consolidating, and over the past five years there have been significant and sizable acquisitions. The ten leading TIC companies represent only 37% of the global market, but all are billion-dollar companies with tens of thousands of employees and more than 1,000 locations globally. In addition, all of these companies occupy market-leading positions in both emerging and developed economies. Most of the top-10 companies provide testing, inspection, verification, audit, accreditation and consulting services, and attempt to manage global supply chains and reduce operational, product and market risks to clients. In other words, these TIC companies have strong existing relationships with all the global food companies.

It is hard to forecast what’s next for the food contract lab market. Given current trends and drivers, the market clearly will continue to grow and take share. Not as clear is which companies will be the dominant FCL companies five years from now.

In our next blog: What does the boom in FCLs mean for food safety diagnostics companies?

A new report from Strategic Consulting, Inc. details the growing trend in food companies to send quality and safety testing offsite to third party contract testing laboratories. The volume of food testing conducted at contract labs is growing at a faster rate than the total food testing market, and is expected to continue to do so over the next five years.

Food companies around the world increasingly rely on 3rd party contract testing laboratories for their food quality and safety testing. In 2013, worldwide revenue for food contract testing labs will exceed $3 billion, with a compound annual growth rate of 9.4%. SCI’s Food Contract Lab Report (FCLR) is the first report to examine this market segment in detail, and reviews test volumes, revenues and emerging trends in quality and safety testing conducted by third party laboratories for food companies around the world.

With the volume of food testing conducted at contract labs growing at a faster rate than the food testing market as a whole, this trend has implications for both food companies and diagnostic test manufacturers. END_OF_DOCUMENT_TOKEN_TO_BE_REPLACED

Strategic Consulting is pleased to announce our first report reviewing the test volumes, revenues and trends for quality and safety testing services conducted by third party laboratories for food producers around the world.

For some time now, Strategic Consulting has been following the increasing trend at food production companies around the world to send food quality and safety testing to third party contract testing laboratories. This year in fact, total revenues for food contract test labs are estimated to reach $3.05 billion, up from $1.95 billion just five years ago, at a healthy compound annual growth rate (CAGR) of 9.4% worldwide.

END_OF_DOCUMENT_TOKEN_TO_BE_REPLACED

A new publication from Strategic Consulting, Inc., Food Micro, Eighth Edition: Microbiology Testing in the Global Food Industry puts the 2013 market value of worldwide microbiology testing for food safety at $2.9 billion. The market value for food micro testing has increased 40%, or $832 million, in the past five years.

In total, the global food industry will conduct 966.5 million microbiology tests this year to ensure the safety of food products and detect dangerous pathogens in food. END_OF_DOCUMENT_TOKEN_TO_BE_REPLACED