Whole Genome Sequencing – Ahead of its Time?

Posted in: Food Safety, In the News, Market Insights by Bob Ferguson | Comments Off on Whole Genome Sequencing – Ahead of its Time? Thursday, August 29, 2019

At the Food Safety Summit in Rosemont, Illinois this past May there was a great deal of discussion about the use of Whole Genome Sequencing (WGS).  These discussions were also apparent at the IAFP conference in Louisville last month as well.  At both conferences there were presentations from officials from CDC and FDA who discussed how WGS is being used in conjunction with the Pulse Net and GenomeTrakr databases and how this use of WGS has been essential at investigating foodborne illness outbreaks and tracing them back to their source.

Other presentations addressed technical issues related to the use of WGS. While everyone recognized that the technology is powerful and provides a significant increase in the detection and resolution of pathogens compared to other available technologies, caution was advised as the technology is not the panacea that some are starting to think that it is.  Success in using WGS comes from knowing exactly what the data is and is not able to tell you.  A point that was raised repeatedly was just because the genome sequence of a patient-derived pathogen matches that found in a food plant does not automatically mean that plant is the source.  The WGS data must be used in conjunction with data from a thorough epidemiological investigation.  CDC officials indicated that while they considered WGS to be powerful evidence they concluded that epidemiological data is ultimately more reliable in source identification.

Something else noticeable was that the presentations were delivered primarily by regulators, university researchers and public health officials – not food processors.  In our view, this is because this is where most of the work with WGS is occurring – not with food processors.

As part of our Food Safety Insights program in conjunction with Food Safety Magazine, we have conducted multiple surveys of food processors about their use of WGS over the past few years.  In the surveys that we’ve conducted each year since 2017, which include responses from nearly 500 food processors, no less than 90% of the respondents each year indicated that they have not yet employed WGS in any capacity.  Of those who indicated that they have used the technology, most said that they have not used the technology on a routine basis but only on a periodic basis to identify the source of contamination as part of a specific project – such as “search and destroy” projects designed to identify and eliminate “hot spots.”   One processor reported that they used WGS as part of a one-time project to compare the pathogens found in environmental samples across multiple facilities to determine if they had a common source.  A few reported that they had used WGS, but the data did not help them solve their issue, and they felt WGS was less useful than they originally hoped when they started the project.

As of now, WGS seems to remain a technology of limited applicability for food processors.  Some experts believe it will remain this way for years to come.  The ones we’ve spoken with believe the use of WGS by processors for incident investigations will continue to grow but question whether it will ever see widespread use for analysis of daily or routine samples.

This is a market that we will continue to track closely. 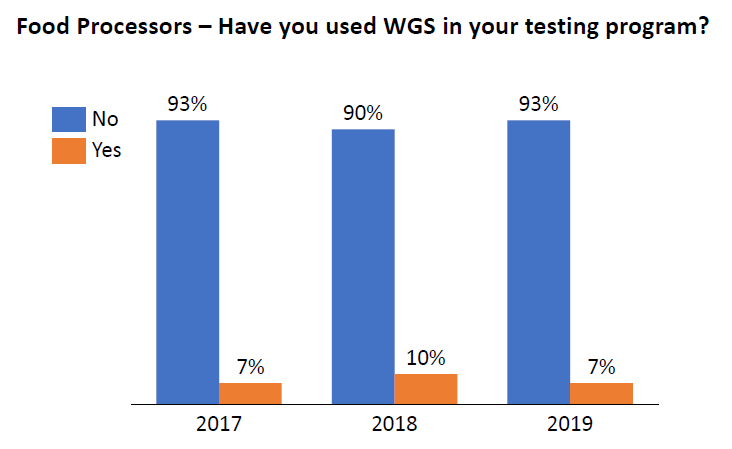 This entry was posted in Food Safety, In the News, Market Insights. Bookmark the permalink.
© Copyright 2020 Strategic Consulting, Inc.