Where Has the Growth in Food Safety Testing Gone?

Posted in: Blog, Food Safety, In the News, Market Insights by Bob Ferguson | Comments Off on Where Has the Growth in Food Safety Testing Gone? Wednesday, November 12, 2014 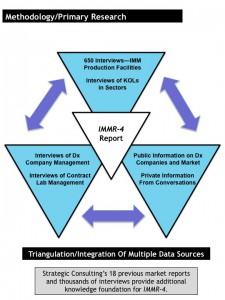 IMMR-4 is based on extensive primary research into all aspects of the industrial microbiology market, including detailed interviews with producers, regulators and diagnostics competitors. SCI conducted more than 650 interviews in 23 countries around the world, with close to one-third of those interviews conducted in Asia (China, India, Indonesia, Thailand, Singapore and Vietnam) due to the region’s economic importance, in both production and consumption, in the industrial market sectors.

Interview data and other information were analyzed using a combined bottom-up and top-down approach. For example, overall market estimates were derived from the test volume numbers given by production companies, and then triangulated with other information gathered through SCI interviews and pubic information research.

In hundreds of interviews over the last two years, when QA/QC managers in production plants were asked about test volume growth, the general response was “yes, growth”. The drivers for test volume growth, such as new regulations and ongoing customer demand, are not consistent across all geographies however. North American and Asian/ROW plants report growth in test volumes, while test volume in European facilities remain flat. Although somewhat diminished, growth in micro test volumes continues even in the face of world economic issues.

In fact, the total market for industrial microbiology tests is projected to increase 25.7% over the next five years, from 2.0 billion tests in 2014 to 2.5 billion tests in 2019. This represents a 4.7% compound annual growth rate (CAGR) in test volumes, which is slower than over the past 20 years. In other words, testing is increasing but not as robustly. With many production companies implementing process improvements over the last decade, growth in test volume may be tied to increased consumption alone going forward.

What’s Up with Recent Financial Reports from Diagnostics Companies?

Given the test volumes and projected growth reported by food production companies, I was a bit surprised by the financial reports of some key companies in the food safety testing market. Roka Bioscience had no new sales of its Atlas System last quarter. Neogen reported that their food safety business grew only marginally (3%) for the current quarter. And although we can’t isolate the food safety business of industry giant bioMérieux, overall their industrial business was flat for the first nine months of the year.

With leading businesses showing little or no growth in the sizeable food safety testing market, are we seeing a market that has become overcrowded, with little or no growth remaining? Based on financial reports, it’s hard to know specifically where growth remains and where things are flat or declining, as these large companies do not report on a geographic or product basis.

Is it time to recalibrate expectations for the traditionally robust food safety testing market? Has the food safety diagnostics business reached its peak in spite of major drivers such as continued media coverage of foodborne outbreaks, ongoing implementation of FSMA, industry-wide efforts such as the Global Food Safety Initiative (GFSI), and the increased consumption of food that is sourced from all over the world?

I’m going to venture an uncharacteristic answer and say “perhaps”. Perhaps the increased focus on industry testing over the last ten years means that for the most part, major food producers have their testing programs (and thus volumes) in place. Perhaps the five-year economic malaise that has impacted so many countries and businesses is now affecting the until now unmatched growth engine of food safety diagnostics? Or perhaps it is all of the above.

One other possibility comes out of SCI’s recent review of a particular segment of the market, contract test labs. Over the past few years, there has been a shift in where analysis is performed with some sectors sending a greater percentage of samples outside to corporate facilities or contract testing labs. The Food Sector, driven by lab accreditation requirements among other factors, is utilizing contract labs more heavily in certain geographies.

Is competition for diagnostic manufacturers coming from businesses that had previously been among their best customers? Eurofins reported 15% growth in revenues for the first nine months of 2014. As food contract labs grow their market share in food safety testing, they are able to increase their influence over the test methods and products in use, and their purchase patterns can be different from food plant labs.

Stay tuned. As 2015 approaches, we’ll continue to watch, report and comment, here and on Linked In and Twitter.

And in the meantime, let us know what you think. Are the days of double-digit growth in food safety testing a thing of the past?

New research from Strategic Consulting, Inc. details microbiology testing conducted by companies around the world to ensure the quality and safety of products in the food, beverage, pharmaceutical and personal care markets, and in environmental water and industrial processes. 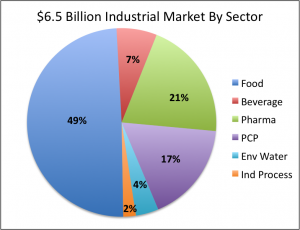 The industrial microbiology market is large and growing, the second largest diagnostics market after clinical diagnostics in test volume and market value. More than 90,000 industrial plants worldwide conduct close to 2 billion tests each year, which represents a market value of $6.5 billion. Because the demand for consumer products is growing as the world’s population grows, increases in product quality and safety testing appear to continue undaunted by current worldwide economic problems.

The global industrial market is complex, however, with varying testing requirements and regulations resulting in variations in growth across market sectors and geographies. According to Tom Weschler, president of Strategic Consulting, the rate of growth in the broader market is slowing when compared to previous years. “Numerous drivers for industrial testing, such as public and regulatory concern about product safety, continue to offer pockets of opportunity, but not in all areas. One example is rapid microbiology methods, which have seen significant adoption in certain sectors and geographies, and little or no uptake in others,” Weschler said.

Numerous drivers for industrial testing, such as public and regulatory concern about product safety, continue to offer pockets of opportunity, but not in all areas.

Industrial Microbiology Market Review (IMMR-4) provides detailed analysis and insights into the complexities of this market, including:

For many diagnostic companies, industrial microbiology is one piece of a larger diagnostics portfolio. As a result, market metrics can be difficult to ascertain. IMMR-4 fills this gap, and provides more than 200 pages of detailed discussion and 150 charts and diagrams. Importantly, these data and insights are based on extensive primary research into all aspects of the industrial microbiology market, including:

IMMR-4 offers five additional appendices with further detail on Organisms and Methods, the Food, Pharmaceutical and Personal Care Product sectors, and a completely new Review of Microbial Identification practices and technologies in the industrial market.