Increased competition, the growing dominance of food contract testing labs, and changes in product mix are turning good times to troubled ones for some food safety diagnostic companies.

For much of the past 20 years, the food safety market has been very, very good to the diagnostic companies, especially those making pathogen testing instruments and consumables. A number of dramatic shifts in the market, however, resulting from increased competition, the growing dominance of food contract testing labs and the subsequent change in product mix, have turned good times to troubled ones for some pathogen test manufacturers.

The story of big changes for pathogen testing and the food safety diagnostics industry begins with the Jack-in-the-Box disaster in 1993. Described by Jeff Benedict, author of the 2011 book, Poisoned, as “far and away the most infamous food poison outbreak in contemporary history,” the E. coli outbreak from tainted ground beef sickened 732 people and killed four children, and set a number of pivotal market drivers in motion.

Most importantly, this incident (and a number of other egregious recalls later the 1990s) raised food safety to a top-of-mind issue and compromised the public’s trust in the safety of their food. This drove major changes in government regulation as well as food industry processing and testing practices, and greatly increased the level of pathogen testing conducted by food processing companies worldwide. 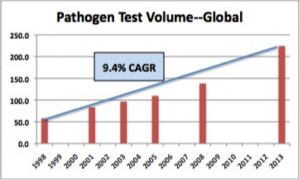 At the same time, the food supply chain was growing increasingly complex, with imports accounting for 15-20% of U.S. food consumption. The increase in imports led to even more pathogen testing to monitor food safety at every point along the global food chain.

As seen in the chart at right, these factors have driven worldwide pathogen testing volumes up by more than 400% in the past 15 years.

The increased sales and success of the food diagnostic companies with their new, “rapid” pathogen systems attracted many other participants to the market. The number of companies providing pathogen-testing products went from a handful in the 1990s to more than 20 a decade later. While each new participant offered advances in testing technology, most were evolutionary and not revolutionary. And every improvement—for example, reduced enrichment time or increased system sensitivity/specificity—would soon be matched by others manufacturers.

Compounding the increased price competition has been the concentration of pathogen analysis (and other food safety testing) in fewer and larger facilities. As discussed in the three previous blogs in this series, more and more pathogen analysis is now conducted at FCLs or in larger FPLs. Small and mid-sized food plant labs seem to be closing, and looking to third-party contract testing labs for their food safety analytical needs. This concentration puts more buying power in fewer—and bigger—hands, and further exacerbates price competition among test manufacturers.

Customer concentration also is changing the requirements for pathogen testing systems, as automation, throughput and matrix versatility become increasingly important for large volume testing laboratories. Some pathogen diagnostic companies are having difficulty matching the revised product requirements, and as a result are not competing as effectively in the new environment.

Although pathogen diagnostic companies are already challenged, SCI sees another big change in the market with the potential for even greater profit impact. IEH Laboratories, one of the larger FCLs, has been producing their own “home brew” reagents for pathogen test analysis for the past 10 years. By making their own reagents, at a cost of roughly $1-$2 per test, IEH avoids the added costs of purchasing reagents from diagnostic companies, with prices ranging from $4-$8 per test. As a result, IEH has had a lower cost basis—and greater profits—than its competitors. This “home brew” approach is also affecting profits for the pathogen diagnostic companies.

Other FCLs are aware of their competitor’s “home-brew” reagent approach. With the leading FCLs running 100+ labs worldwide, to avoid paying full price to diagnostic companies for reagents is compelling. While a country-by-country approval of this approach would need to be secured (e.g., AOAC approval is required in the U.S.), the leading FCLs have the critical mass/size—and profit incentive—to move forward. IEH has, in fact, received AOAC approval for its methodology/system for pathogen analysis. If and, most likely, when more of the larger FCLs follow the “home-brew” route, the impact on the food diagnostic companies could be significant.

It should be noted that not all pathogen diagnostic companies are being equally impacted by these trends. Anticipating the increasing importance of FCLs, some diagnostic companies already have introduced automated sample prep and analysis systems with higher throughput, targeted to the needs of larger corporate and food contract labs. Others diagnostic companies are using a different strategy, developing and selling pathogen-testing approaches that specifically target small and medium food plant labs. The hope is to get FPLs to keep pathogen analysis at the food plant or, even better, to bring it back from the FCLs because of lower costs, better control and quicker results.

From the good times of the 1990s and early 2000s to the increasing price competition over the past 3-5 years and the possibility of being cut out of the food safety testing market completely—these are troubling times for some diagnostic test companies. Some are positioned with differentiated products, and others have strong market channels and broad product lines. They should be fine. Many diagnostic companies, however, could find themselves in the wrong place at the wrong time. For them, the recent evolution of the food safety testing market, and the lucrative pathogen testing market in particular, could prove costly.