Posted in: Blog, Food Safety, In the News by Bob Ferguson | Comments Off on 8 Things to Know about Bacterial Outbreaks from the Recent CDC Report on Foodborne Outbreaks and Illness Tuesday, February 12, 2013

I’ve spent some time analyzing the recent data released by the CDC on foodborne disease outbreaks and illnesses for the period 1998-2010. My basic conclusion from a review of the numbers is that our food supply seems to be safer than the broad estimates provided by the CDC and, as a result, reported by the news media and assumed by the general public.

I discuss some of the broad numbers in my latest blog for Food Safety Magazine, but drill down specifically into foodborne bacterial outbreaks in this blog.

You find the two CDC reports referenced in this blog and the Food Safety Magazine blog at the links below:

Let’s start with the broad numbers from the CDC reports. Then, given Strategic Consulting’s specific interest in microbiology diagnostics, we’ll look more closely at CDC’s confirmed outbreak information with bacteria as the causative agent.

I find this data quite interesting. We are all aware of bacterial contamination as a major cause of foodborne disease outbreaks, and the CDC numbers bear that out: Bacteria caused 52% of all outbreaks during the 13-year period from 1998-2010.

I was surprised, however, by the low impact of chemical contamination on outbreaks. I also was surprised by the high number of outbreaks caused by viruses (Norovirus, almost exclusively). Interestingly, SCI research shows that the food industry doesn’t test for viruses.

Reported illnesses by agent mainly follows the same breakdown as food outbreaks. However, an even higher percentage of illnesses are attributed to bacteria as the cause of illness. 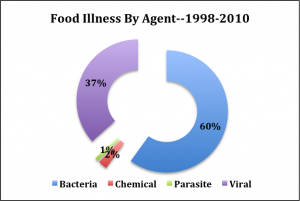 I find this information to be very important. There has been a general trend downward in bacterial outbreaks since the late ‘90s. This downward trend continued until 2008, followed by a 2-year uptick in 2009 and 2010. On average, bacteria account for 227 food outbreaks per year. 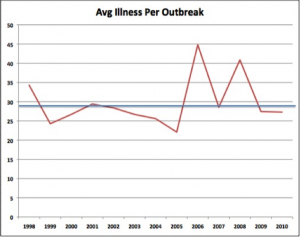 Illnesses by organism generally follow the same pattern as for food outbreaks. Salmonella is clearly the leading cause of foodborne illness in the US. 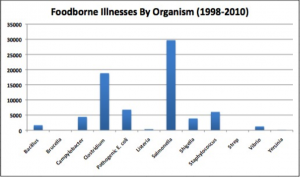 While the food industry has more work to do, and any food disease outbreak is tragic and undesirable, food safety is better than generally portrayed by the media. And it seems that the CDC has been overestimating the problem.