Comparing Food Safety Testing Practices in the US and Europe: How Fast Is Fast Enough?

Posted in: Blog, Food Safety, Market Insights, Press Releases by Bob Ferguson | Comments Off on Comparing Food Safety Testing Practices in the US and Europe: How Fast Is Fast Enough? Tuesday, October 2, 2012

Woodstock, VT October 2, 2012 — A new study comparing food safety testing in the United States and Europe points to key differences between these two large food producing regions, and projects continued but differing growth in the size and value of their respective food microbiology testing markets.

Food Micro, Seventh Edition: Comparison of the Food Microbiology Testing Markets in the US and EU (Food Micro—7) from Strategic Consulting, Inc. (SCI), compares total test volume, market value and growth in food microbiology testing, including the organisms tested and the technologies used for food safety testing in each region.

According to Tom Weschler, president of Strategic Consulting and lead author of Food Micro—7, an important difference between the US and European markets is the test methods used, particularly for pathogen testing. In general, US food producers have embraced “rapid” test methods that are touted as easier to use and delivering faster results. European food producers have been slower to adopt these newer technologies, and have continued to use a higher percentage of traditional, culture-based test methods. 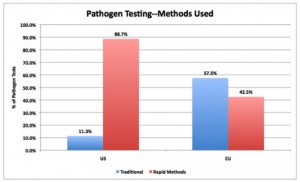 “European food producers are adopting rapid test methods but at a slower rate than their US counterparts,” Weschler says. Nearly 89% of pathogen tests conducted in the US in 2010 used rapid methods, compared to just over 42% of the pathogen tests conducted in Europe in 2011. “There appears to be less urgency for pathogen test results in Europe when compared to the US, where faster test results are a key driver in the conversion from traditional to newer microbiology tests methods,” Weschler says.

The United States and Europe are substantial markets for food safety microbiology testing. Food producers in the two regions draw on an increasingly global food supply to provide consumers access to a broad array of foods year-round. At the same time, consumers are more concerned about the safety of their food, due to increasing food recalls and heightened press coverage of pathogen outbreaks that sicken people in multiple states and countries.

“There appears to be less urgency for pathogen test results in Europe when compared to the US, where faster test results are a key driver in the conversion from traditional to newer microbiology tests methods,” Weschler says.

“Routine” microbiology tests are used to determine the presence and levels of microorganisms in the food plant or the food product. Routine tests accounted for 78% of all food microbiology tests performed in the US. The remaining 22% were pathogen tests, which look for specific organisms that have the potential to cause human disease, such as Salmonella, Listeria, Campylobacter and E. coli O157.

Strategic Consulting has published seven market reports to date reviewing microbiology testing practices and technology in the food industry. The food sector represents almost 50% of the total industrial microbiology testing market, and is more than double the size of any other industrial segment including pharmaceutical, personal care products, beverage, environmental, and industrial processes.