I recently spoke with Ted Moskal, president and CSO of Vivione Biosciences, LLC, which has reintroduced the flow cytometry-based pathogen detection method called Rapid-B. Its key advantage over other pathogen detection approaches is rapid results. Their detection technology enables shorter enrichment times, which enables quicker release of end products as depicted in this comparison table below taken from the company website.

The company (called Litmus Rapid-B at the time) launched the method about five years ago and created some solid interest. However, market acceptance was delayed as the company spent much of the next few years on method development and the generation of third-party data for real world applications.

At the heart of the interest in the Rapid-B technology are rapid results. Getting pathogen results as quickly as possible is important for certain applications and customers.

In Food Micro—5, SCI’s recent report on food microbiology testing in the U.S. food industry, we document that there were just over 46 million pathogen tests conducted in the U.S. in 2010. Not all of these tests require pathogen results ASAP, but in some cases inventory is being held or risks need to be minimized. For these applications there is a gap between current detection methods and their business/risk management requirements. 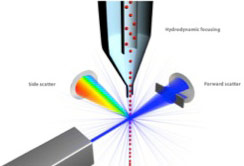 The Rapid-B approach utilizes antibodies that tag the target and then get detected in the flow cytometer detection cell. Currently they have tests for Salmonella, E. coli O157, Vibrio, and Staph, all requiring reduced enrichment times when combined with the system’s low limit-of-detection. Environmental pathogen samples seem to be an excellent application for the technology. 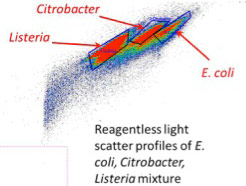 A paper was recently published on the technology entitled, “Reduction of food matrix interference by a combination of sample preparation and multi-dimensional gating techniques to facilitate rapid, high sensi-tivity analysis for Escherichia coli serotype O157 by flow cytometry.” Researched and published by an independent third-party, the paper is available here.

As discussed in this paper, key applications for the Rapid-B system are meat and possibly, produce water. If a food plant is holding significant inventory or wants tight control of the production environment, they might find this a worthwhile product to consider. Because Rapid-B can distinguish live versus dead cells, the system might also be used for process control and/or biomapping of a food production facility. The instrument pricing is just over $100,000 while the test cost is about $15.